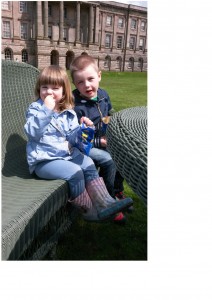 Joe initially came to Independent Options to Baby Sensory when he was around nine months old.  As Joe became older, it was clear that he had some developmental delays and he was referred for support.  Joe’s speech was delayed and when he was two, we were made aware of the ‘Sing and Sign’ sessions at Independent Options.

There, Joe could learn songs along with the signs.  It was a really fun session; Joe really enjoyed it and his baby sister Isla could come along too.  Joe started to learn the signs to the songs and we could practice these at home.

Before long, Joe would learn a sign and he would start to say the word.  This was the beginning of his language development which quickly progressed and we are really grateful to the team for all of their support in this group.

Joe is now six and has a diagnosis of autism.  He enjoys coming to the After School Club and Boredom Busters with his sister Isla, now four.  They both enjoy playing with the toys, doing craft activities and they love to play in the garden with the other children attending the groups.

These are really valuable groups for Joe as he can let off steam after a busy school day or at the weekend when his time is less structured.  The groups provide Joe with an important routine in a place where he feels comfortable and secure.  Isla can attend the groups too and they both really look forward to seeing Sam and Julia.

Isla is three and a half years old and has been coming to the Children and Family Centre for around two years with her family.

At first Isla had no diagnosis, but it was clear to her parents that something was different from an early age as she had a short attention span and would have regular crises if other children came near her. Her speech was also delayed and she didn’t speak or make any verbal noises until the age of three.

“Isla has speech and language delay but one of the first words Isla spoke was when she shouted “Messy Play!”, so we knew then how vital it was for her to come here.”